The File on Charlie

Charlie Is No Darling

Architecture: He Knows What He Dislikes

From the National Gallery to fancy apartments for the super-wealthy in Chelsea Charlie has done his best to deprive the country of modern architecture. He does not like it, so he thinks it should be stopped.

That's not surprising in a man locked into a love of a past that preserves his privileges. And many other people also dislike such architecture. The difference with Charlie is that he uses his feudal privileges and contacts to deny modern architecture to those who do want it.

In 1984 Windsor was able to stop a plan for an extension to the National Gallery that he disliked. The architects' practice that designed the new building had had a high reputation. But Charlie's intervention damaged its high repute. It has also been claimed that Gordon Graham, former president of the Royal Academy of British Architects was denied the feudal title of “knight” because he spoke out against Charlie on this. 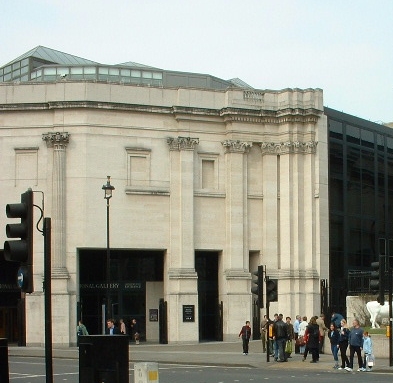 The National Gallery extension that Charlie gave us

By 2009 Windsor's ambitions had widened to include another Rogers design, a modern redevelopment of the Chelsea Barracks site in London. The army barracks were an ugly complex of buildings, including multi-story blocks that locked as if they belonged on a down at heel housing estate, watched over by CCTV cameras and patrolled by soldiers with rifles at the ready.

In an absurd exaggeration Charlie described plans to redevelop this eyesore as “a gigantic experiment with the very soul of our capital city”.

The site was owned by Qatari Diar, a property investment company owned by the sovereign wealth fund of Qatar. It planned to redevelop it in partnership with the British CPC company, owned by Christian Candy. Qatar is classified by Freedom House as “not free” and was the main financial backer of President Morsi of Egypt.

But Qatari Diar changed its plans after Mr. Windsor appealed to the feudal rulers of Qatar, the source of finance for the development.

In court proceedings started by CPC it was revealed that Charlie had written a private letter to Qatari Diar chairman, Qatari prince and prime minister Sheikh Hamad bin Jassim bin Jaber al-Thani faulting what he called a “brutalist development”.

Draft minutes of a meeting between Windsor's then “private secretary” Michael Peat and the Chief Operating Officer of Qatari Diar say that “The Prince of Wales wanted to assist his friends in Qatar and avoid criticism of them which he feared would stem from imposing a scheme which was not popular in London.” What a nice touch! The Prince of Wales is doing what the people of London want, not what he wants.

Allegations were made that the Qatari finance firm had destroyed email evidence and that witnesses had lied under oath. The judge said that it could not be determined whether emails had been destroyed but described witnesses as unreliable and dishonest.

During the legal proceedings Windsor's pompous demeanour was put in a new light by evidence that in a meeting with the Emir of Qatar he had "pissed in his ear about how awful" the plan for the redevelopment was.

The head of Qatari Diar gave an hilarious explanation of his company's reasons for giving in to Charlie. "We respect the democracy and procedures in the UK" he said.

In 2009 a group of ten British architects of international renown called for a boycott of a lecture by Windsor at the Royal Institute of Architects. The architects, including Norman Foster, Zaha Hadid and Frank Gehry, were angry at Windsor’s use of his feudal privileges to give an unfair advantage to those who oppose modern architecture.

One of Windsor’s charities, The Foundation for the Built Environment, was criticised in 2009 for its involvement with his interference in the Chelsea barracks site redevelopment.

According to the Guardian in 2009, the Charity Commission "ordered the foundation to explain its trustee decision-making, the activities it undertakes to further its charitable purposes for the public benefit, and its relationship with" Windsor.

Republic, the largest British anti-monarchy organisation, has alleged that the foundation is used by the heir to head of state to lobby on behalf of his personal campaign against modern architecture. As a registered charity it is obliged to pursue the public good, not personal interests. According to Republic the foundation admitted that its strategy must be approved by Windsor.

Windsor's support for homeopathy has also been controversial.

In More Harm Than Good, published in 2018, Edzard Ernst and Kevin Smith describe this as "public preaching" about "his favourite anti-science superstitions". The writers say that his support for alternative medicine is "immoral".

The book's authors point to the fact that Windsor's feudal status gives him a privileged voice. His use of this privilege does "a disservice to the truth" they say. His support for unproven cancer treatments was "foolish and immoral". By selling a "tincture" under his Duchy Originals brand the UK's next head of state was "exploiting a gullible public".