Britain honours its dead monarchs. And its ladies and lords. Its dukes, its knights, and its baronesses also. Those who have lorded themselves over the people, trodden on their democratic rights and taken their money.

When they are convicted of crimes it honours them still. A British "Lord" may sleep on a prison bed but, if he is a legislator-for-life, his seat in the legislature will still be his when he is paroled.

But those who have fought for the rights of the people are largely unknown to the average citizen and unhonoured by the state. Even now republicans are not allowed to take a seat in parliament. They are also barred from military service and from the judiciary.

When the renown of republicans has survived it can be despite their democratic beliefs, not because of them. John Milton was one of the nation's greatest poets. He was also a republican. But here is how one historian, Hugh Trevor-Roper, referred to him: "Next to Shakespeare, Milton was exalted as the greatest of English poets. His republican past was forgotten or forgiven".

In What Price Liberty Ben Wilson gives another example of this British flaw. He writes of a navy veteran who was accused of encouraging loss of confidence in the police during a strike. "His bad character was proved in court", Mr. Wilson writes, "when the prosecution presented written evidence found in a police raid on his home which showed he supported republicanism and deplored the (Emergency Powers Act) 1921 regulations".

Few Britons would be unable to name a host of monarchs, people claiming a genetic superiority that gives them a unique fitness to be head of state. But most would not recognise the names of John Lilburne, from Sunderland, and Thomas Rainsborough, a Londoner.

You, being peers, as you are called, merely made by prerogative

"You, being peers, as you are called, merely made by prerogative, and never entrusted or empowered by the Commons of England, the original and fountain of power; Magna Carta, the Englishman's legal birthright and inheritance, so often bought and redeemed with such great seas of blood and millions of money, hath justly, rationally, and well provided that your lordships shall not sit in judgement, or pass sentence in criminal causes, upon any commoner of England, either for life, limb, liberty, or estate, but that all commoners in such casees shall be tried only by their peers or equals".

John Lilburne, 1646, when summoned to the House of Lords for speaking ill of a lord.

Lilburne was tortured by the state and dragged through the streets of London behind an ox cart because, when arrested for importing unlicenced religious publications, he demanded that the charge be put to him in English. Later he served both as a lieutenant-colonel in the English civil war and in the movement for democratic government.

The failure of Britons to honour Lilburne is cause for sadness not just because of the sacrifices he made for them. But also because he has been recognised in the United States as an early and outstanding advocate of civil liberties.

"For really I think that the poorest he that is in England has a life to live, as the greatest he; and therefore truly, sir, I think it's clear, that every man that is to live under a government ought first by his own consent to put himself under that government; and I do think that the poorest man in England is not at all bound in a strict sense to that government that he has not had a voice to put himself under." Colonel Thomas Rainsborough.

Thomas Rainsborough was a member of parliament and a military commander on the parliamentary side in the English civil wars. In the New Model Army he was a political activist and one of the delegates who presented its demands to King Charles in 1647. He supported the so-called Levellers and advocated universal male suffrage. Colonel Rainsborough led an advance guard when the Army occupied London to prevent a counter-revolution. He was killed by Royalists when he resisted their attempt to kidnap him. Three thousand mourners wore the Leveller sea-green ribbons in his memory at this funeral in 1648. Today his sacrifices for the rights of the people are little known. 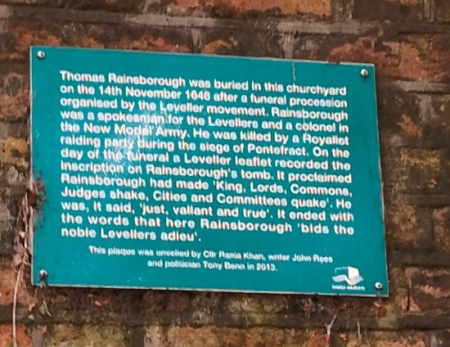 Katherine Chidley, a seventeenth century Puritan activist and "Leveller", is thought to be a possible author of the "humble Petitition of divers well-affected women of the Cities of London and Westminster", presented to Parliament on 5 May 1649. It said of women

"Have we not an equal interest with the men of this Nation, in those liberties and securities contained in the Petition of Right, and the other good laws of the land? Are any of our lives, limbs, liberties or goods to be taken from us more than from men, but by due process of law and conviction of twelve sworn men of the neighborhood?"

Henry Marten was a seventeenth century republican member of Parliament.

"I wish the king may have two chaplains , as I desire to prepare him for heaven".

Henry Marten to parliament in 1647 on request from king Charles that he be allowed two chaplains. It was not until 1649 that Charles was despatched to heaven.

In 1643 he was expelled from Parliament and imprisoned for daring to say that monarchy should be ended and the "royal family" "extirpated". Marten was a signatory of the death warrant for Charles 1 and supported the establishment of a commonwealth to replace monarchy. He not only opposed hereditary right but was also sceptical of Lord Protector Oliver Cromwell who seemed to see himself as a kind of king.

Still less do the British honour those others such as John Wildman, Thomas Wroth, Richard Overton, Robert Lockier, Colonel Edward Sexby, Thomas Scot and the other unnamed women and men who bravely stood against monarchy and for a British republic in the seventeenth century.

Others, not necessarily republicans, who have sacrificed for human freedom are also neglected. The names of John Entick and John Wilkes are hardly known. In the 18th century they sued the "King's Messengers" who ransacked their homes for libelous documents, helping establish the principle that the state is accountable to the courts when it breaks the law. And Brass Crosby is not honoured in Britain. He was a mayor and magistrate, imprisoned for ruling that the state could not seize a citizen without the authority of a magistrate.

"We are not traitors, nor murderers, nor fanatics, but true Christians and good Commonwealth men . . . we sought the public good and would have enfranchised the people, and secured the welfare of the whole groaning creation, if the nation had not more delighted in servitude than in freedom". John Cook, Solicitor General of the English Commonwealth before he was hanged, drawn and quartered by British monarchists in 1660.

But in the 21st century a lord who uses his vote in the legislature to frustrate the wishes of the people is still bowed to.

Until quite recently, if you mentioned republicans in Britain most people would probably have assumed that you were referring to the Irish Republican Army. Indeed, in the context of Northern Ireland republicans who are not supporters of the IRA or Sinn Fein are referred to typically as "nationalists" rather than "republicans." Even in 2009 the state BBC1 TV channel slandered British republicans by claiming that a "leading republican" had been arrested on changes of multiple homicide. This followed immediately on a report of the results of an opinion poll showing majority support for monarchy. The "leading republican" was a little-know member of a small nationalist splinter group in Northern Ireland.

Discussion of abolition of the monarchy was for long taboo. The BBC would not give it air time. Some years ago a participant in a radio discussion programme was asked by the presenter to admit that his criticisms of the monarchy had not been seriously intended! The presenter could not believe that anyone could question the revered institution. Today the broadcaster's reports on the Windsor family range from uncritical to idolatrous.

Republicanism is now receiving some attention, although it is still at the margins of public discussion despite the public self-shaming of the family in recent years. News media commentators do question whether the monarchy has a future, from time to time. Mostly, though, they come down on the side of a more modest, down-to-earth "royal" family. Even a serious publication like The Economist suggested in 2009 that the Windsor family was subsidising the monarchy when the truth is that they cost the taxpayers many millions a year.

Charter 88, the now defunct pressure group for constitutional change, did not call for a republic. Indeed, its founding director Anthony Barnett, evaded the logic of his own arguments in This Time, in which he argued for a constitutional revolution. In that book he took republicans to task for their views.

Nonetheless, the voices of republicanism are getting louder. Here's a rundown of some of them.

Britain's oldest specifically republican group, at least in the sense of being opposed to monarchy. But the group is content for Liz Windsor to complete her "reign" before we are freed from monarchy. Republic's limited vision of republicanism is suggested by its self-description as "The campaign for an elected head of state".

Republic was founded in 1983. In recent times it has become more active and more effective. But for many years its meetings, publications, film shows and competitions left republicans with a strangely low profile.

The campaign once gave pride of place on its Web site to some famous names among (Labour) members of parliament, writers, lawyers and academics as "sponsoring members" of its organisation. One of them was an un-elected legislator-for-life, who went by "Lord Dormand of Easington". The name of this "Lord" also appeared on the organisation's letterhead with no sense of shame or irony as a "patron".

When in 1994 "Lord" Dormand hosted a dinner in the House of Lords and chaired a debate on the future of the monarchy, Republic's magazine declared the event "a milestone in the development of the republican movement in Britain." Mr Dormand's smiling face graced the front cover of the magazine, while in an interview the former Labour member of parliament declared that he could see no contradiction between being a "Lord" and being a republican. In his vision of a republic "Lord" Dormand envisaged a commission of about 6 which would recommend one person for appointment as president, which is not the policy of the organisation he sponsored.

Throneout is a Web site which claims to represent "the views of the growing proportion of British citizens who no longer want to bow and scrape to a bunch of barbaric genetic throwbacks who are the product of centuries of Germanic incest." The Web site has a disrespectful and humorous take on the British royal family. Ideologically it says that it "represents republican views across the political spectrum."